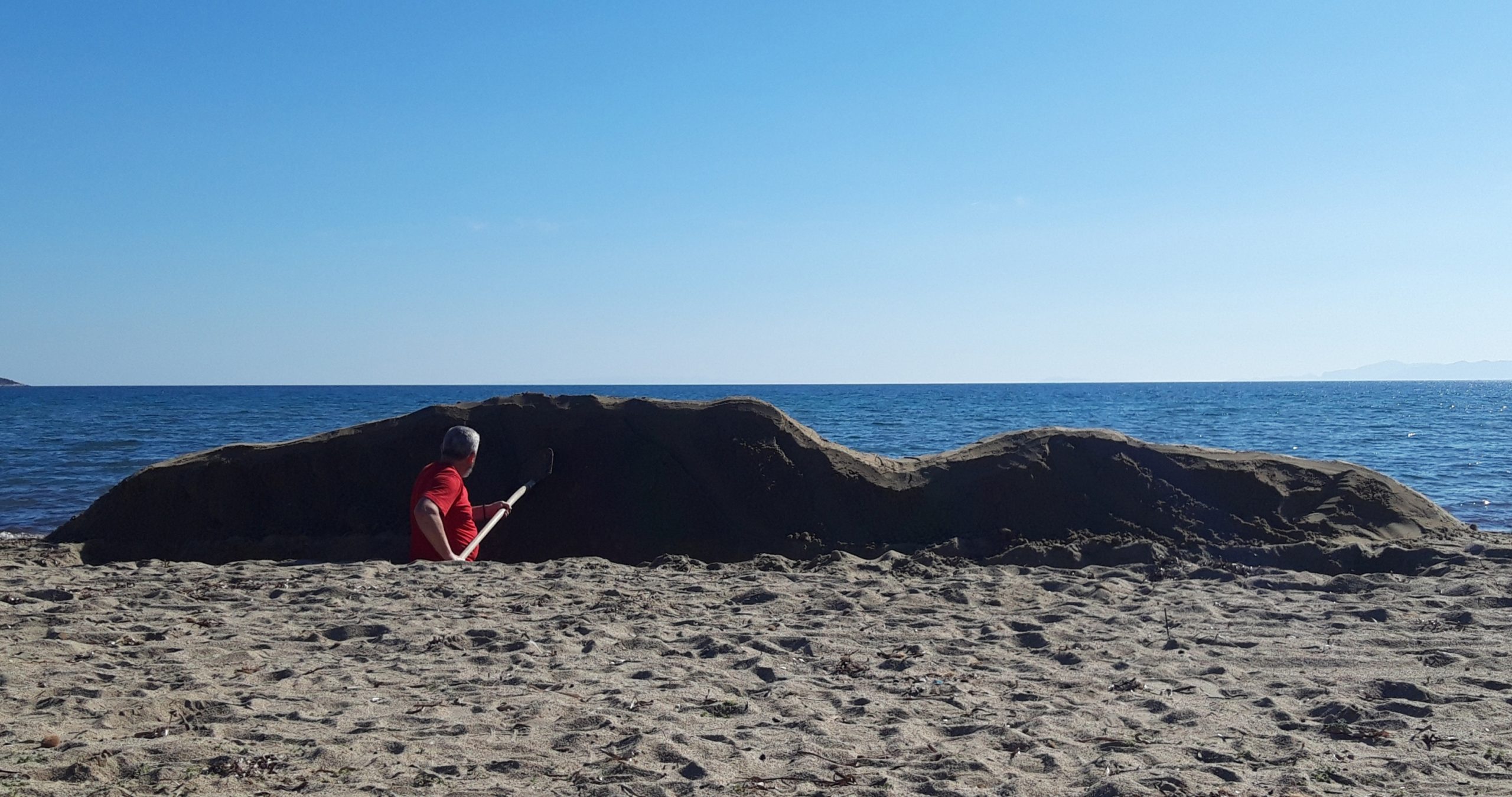 Correspondences #6: are a series of four podcasts by curator, writer, researcher and performance artist Yasmina Reggad and a video by artist and architect Sofia Dona inspired by Plato’s Academy by Filippos Tsitos and My English Cousin by Karim Sayad.

The Mediterranean is by definition a landlocked sea. But beyond this we must distinguish between the kinds of land that surround and confine it. It is, above all, a sea ringed by mountains. This outstanding fact and its many consequences have received too little attention in the past from historians. Fernand Braudel, The Mediterranean and the Mediterranean World in the Age of Philip II

Juxhin Kapaj (Jorgo Prifti) uses a spade to dig, shoveling sand, arduously forming the shape of the mountain range that he passed in 1990 as he migrated from Albania to Greece. The rhythm of the spade digging alongside the sound of the waves on the beach creates a soft background noise covered only by Juxhin’s voice as he narrates his story: from Avlona (Albania), to the Ceraunian Mountains, onto Corfu and Athens. As he digs, he creates a ditch that functions like a negative of the mountain topography which slowly subsumes him the deeper he goes. The mountain formed by the dug-up sand looms over him and slowly even surpasses the horizon line. Meanwhile a lone rower passes by balancing on a surf board. Towards the end of the narrative, an extract of the Greek song from the eponymous film “This Night will last” in which Kapaj’s voice was used as stand in for an Albanian immigrant intercepts the film. The narration becomes more fragmented as Kapaj tries to recall his journey through the mountains, mentioning cities, rivers and the geological topography of the landscape he passes. As he sculpts the mountain range, peaks, crevices and gorges, he effectively reconstructs the landscape and history of his passage. The title of the work is borrowed from the chapter ‘Mountains Come First’ from Braudel’s “Mediterranean” where Braudel points out that less research has been carried out on mountains due to their lack of an agricultural economy. However the mountains that circumscribe the Mediterranean are the embodiment of the passages through, over time.

I.    The Shit Life Syndrome (Script in English & Arabic.)

IV. & V. Life is Confusing at this Point (Script in English & Arabic.)

Creation: Yasmina Reggad · Voice Over: Yasmina Reggad & Didascalie (AN AI) · with an impromptu intervention of : Yamine El Atlassi, Khaled Bouzidi, & Militant women of the Algerian Hira recorded by journalist Nadia Madassi on 22 February 2020, as they were singing ‘Ana Houra Fi El Djazair’ (I am free in Algeria) by Miriam Makeba · Montage: Yamina El Atlassi · Sound Recording From: My English Cousin by Karim Sayad, Close up films, 2019 · Comissioned by: Delphine Leccas and Maria-Thalia Carras as part of Unfortunately, It Was Paradise, Curated by AIN and Locus Athens  · Supported by: Rosa Luxembourg Foundation · Thanks to: Karim Sayad and Close up Films

Sofia Dona is an artist and architect. In 2018, she was awarded the City of Munich Prize for Architecture and in 2015 a Fulbright scholarship. Her work has been exhibited in various spaces such as the Μunicipal Institute of Art and Culture in Tijuana (2019), the association neue Gesellschaft für bildende Kunst-nGbK in Berlin (2017), the Foundation Sandretto Re Rebaudengo in Torinο (2016) and the National Museum of Contemporary Art in Athens (2013). In July 2020, she presented the work Macho Sounds/Gender Noise at the museum Staatsgalerie in Stuttgart in collaboration with Daphne Dragona. In 2019, she presented her solo exhibition Voyageurs at the Kunstpavillon in Innsbruck, and the site-specific work Applaus at the Munich Central Train Station, in the context of the public art program of the City of Munich. In 2021, she is currently a resident at the Bauhaus Residency Dessau. Since 2018, she is co-curating Aphrodite* queer-feminist film festival in Athens. As a member of the Errands group, she has participated in exhibitions with projects such as the Epicurean Garden (Matera Cultural Capital, 2019), Summer Ladders (1st Istanbul Design Biennial, 2012) and Transporting Utopia (2nd Athens Biennale, 2009).

Yasmina Reggad is an independent curator, writer, researcher, dramaturge and performance artist based in Brussels, Belgium. She holds an MA in Medieval History from the Sorbonne University. She co-funded aria (artist residency in algiers) and previously worked at the Delfina Foundation and Art Dubai Projects. She is currently the co-curator of the French Pavilion at the 59th Venice Biennale represented by artist Zineb Sedira.
Yasmina Reggad has conceived exhibitions, screenings, talks, performance and educational programmes at CENTQUATREPARIS (France), Tate Modern and Institute of Contemporary Arts (UK), Madrassa – l’Atelier de l’observatoire (Morocco), and regularly contributes essays on contemporary art and performance art.
Yasmina Reggad’s performances were recently staged at KANAL – Centre Pompidou and Kaaistudio’s (Belgium), Jeu de Paume (France), Tabakalera International Centre for Contemporary Culture (Spain) and the Warsaw Biennale (Poland). She is a 2019-2030 Fellow of the Sundance Institute Theatre Program.