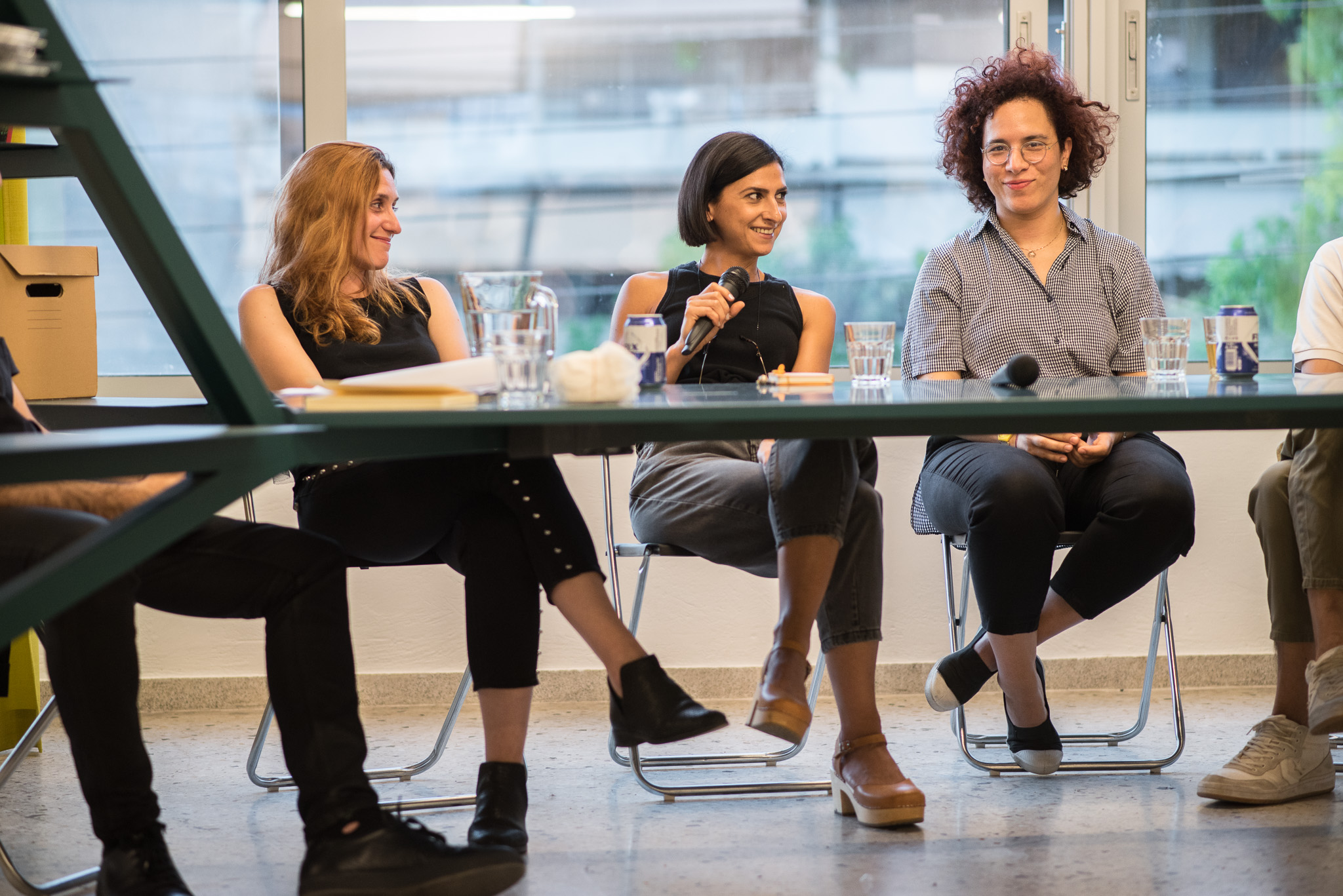 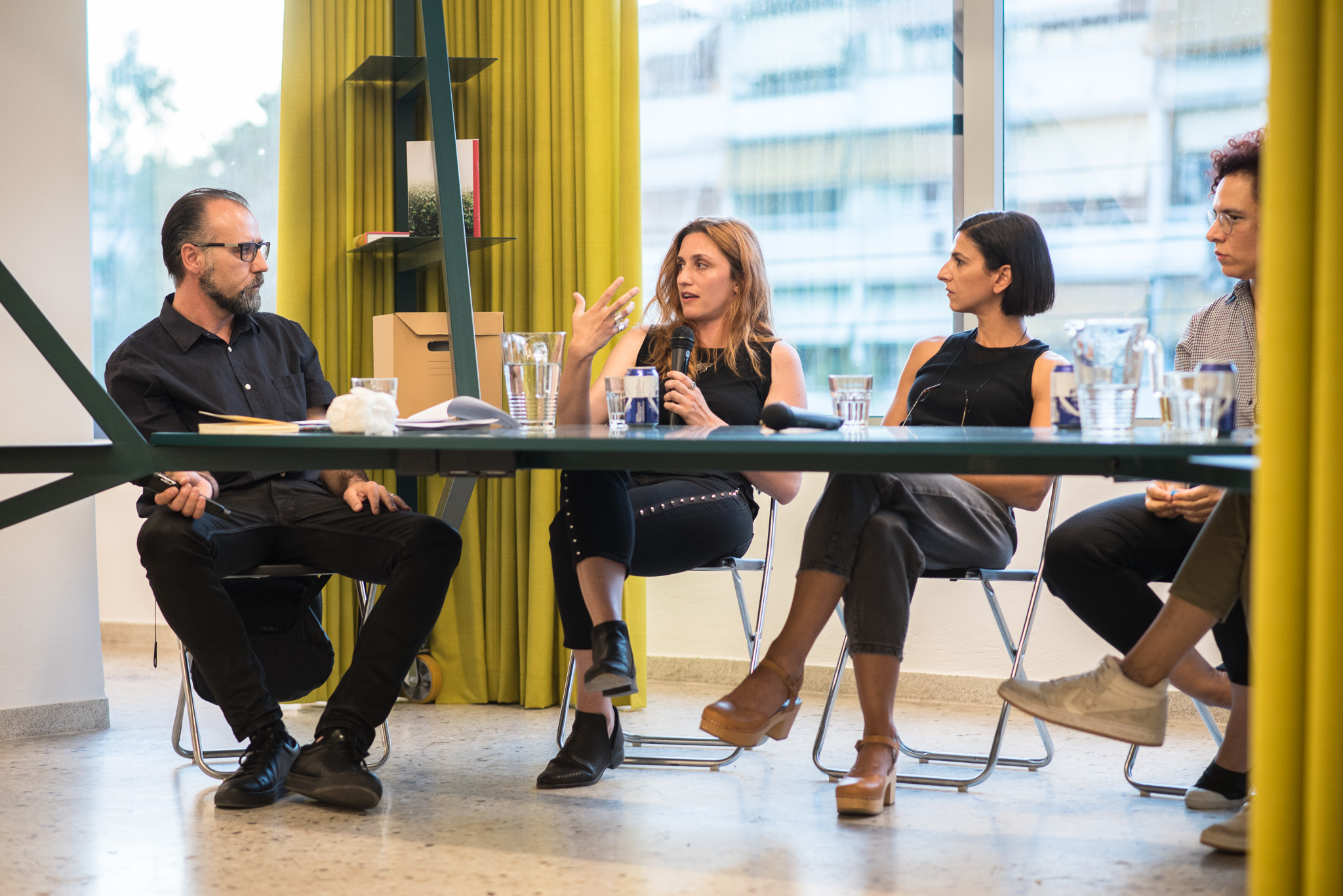 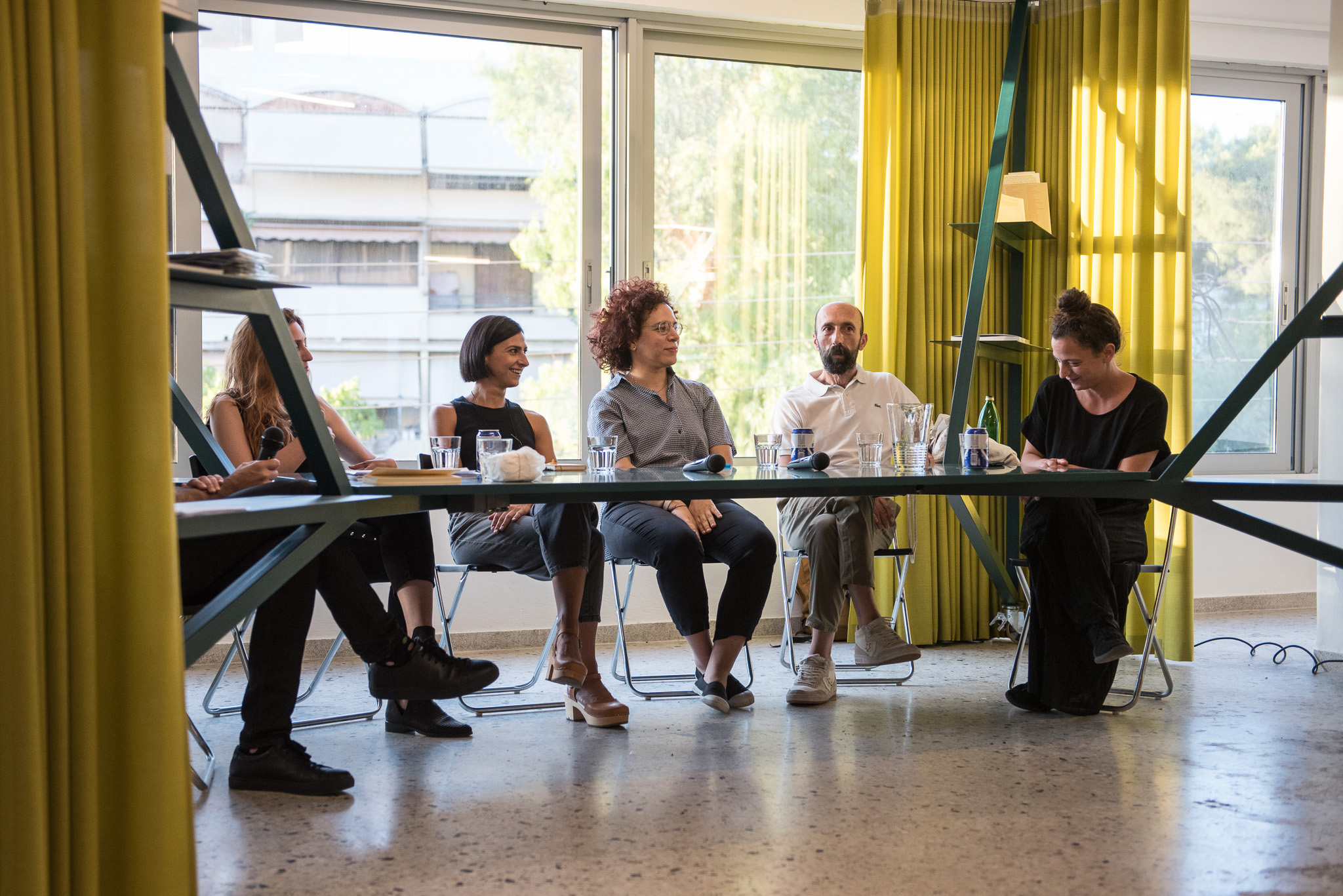 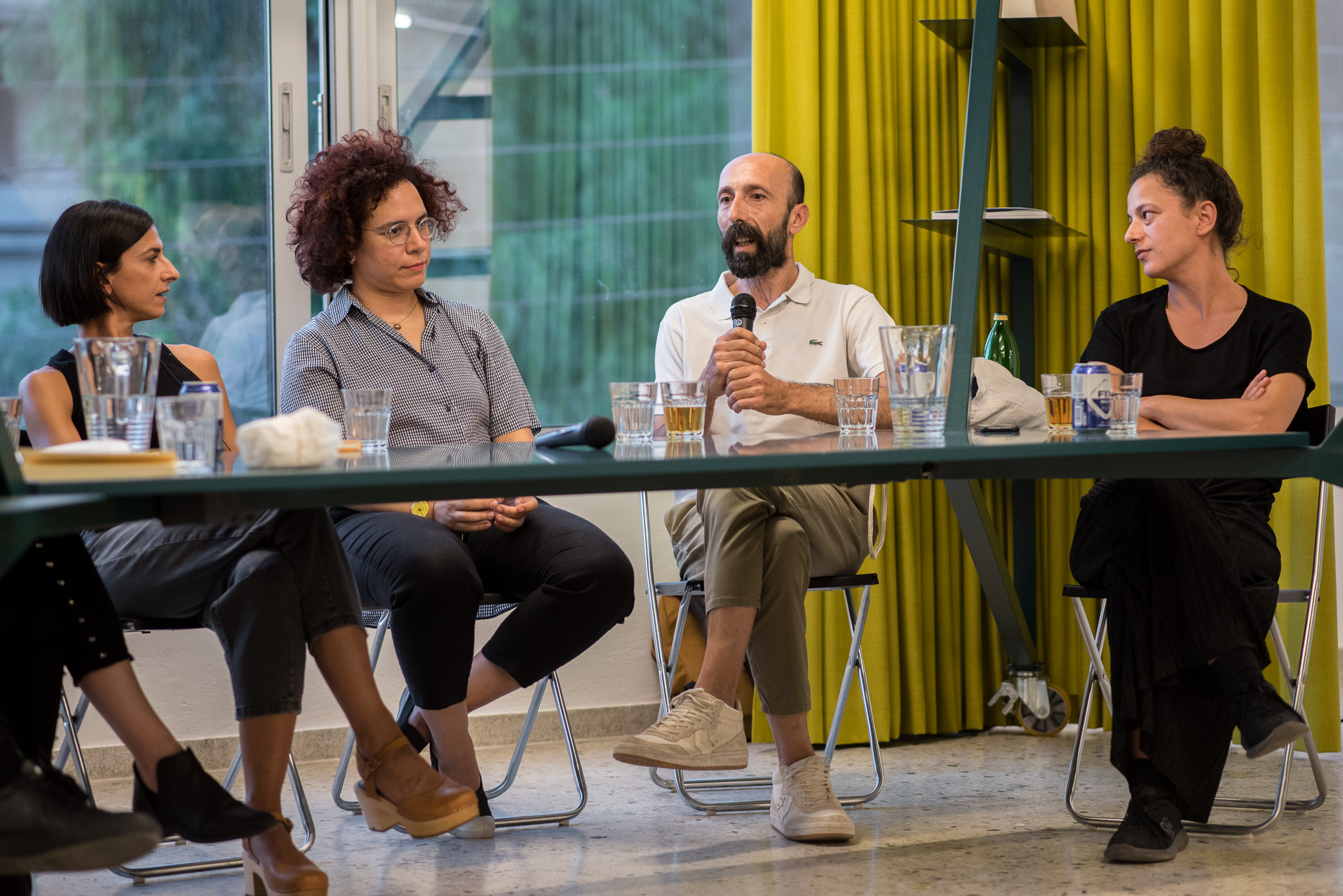 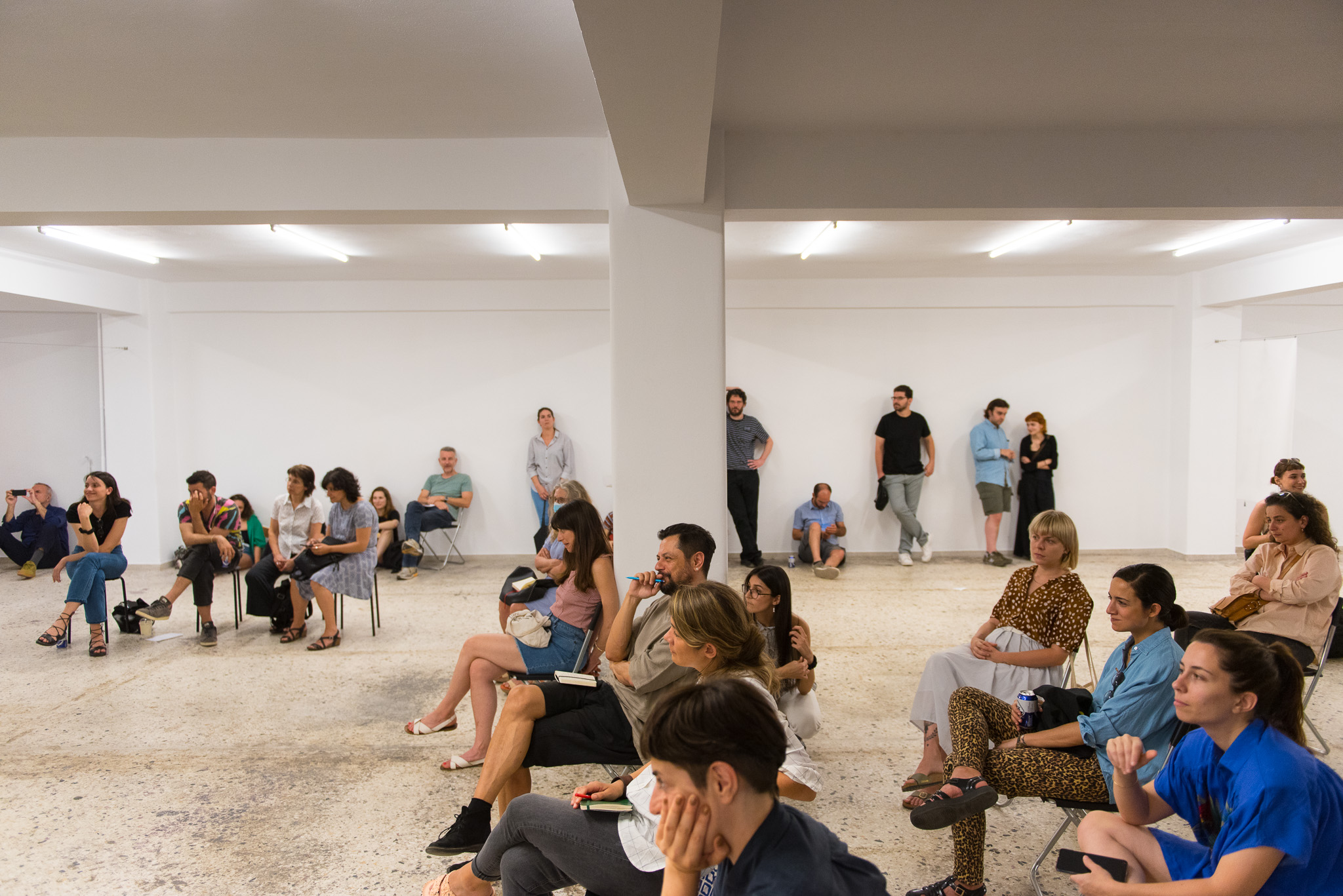 Crossings #3
There is much to say about soap / Soap has much to say
20.00 Wed., 17 June
free entrance
the conversation will be held in Greek
following the updated instructions, up to 160 people can enter the space

Soap by Francis Ponge feels more pertinant than ever. What does an artist have to say about wax, wood, clay, skin and ashes? What can materiality tell us about its existence? Christoforos Marinos talks with Anastasia Douka, Malvina Panagiotidi, Kostas Roussakis, Maria Tsangari and Paki Vlassopoulou about the multiple possibilities of materiality and the importance of matter in their work. The invited artists will be asked, amongst other things to comment on Giuliana Bruno’s assertion that, “materiality is an archive of interrelations and transformations.”

Anastasia Douka lives and works in Athens. She works mainly in sculpture. She believes that everything constructed can break, be reconstructed and then break once again (or at least it has the potential). Douka is a graduate of the MFA sculpture program at the School of the Art Institute of Chicago and the Athens School of Fine Arts. She has been a resident artist with the Fondation d’ Entreprise Hermès, Paris, Skowhegan School of Painting and Sculpture, NY, Yaddo Colony, NY, and Salzburg International Academy. She has been awarded the Toby Devan Fellowship, Chicago, 2014 and the DESTE Prize, Athens, 2011. Recent exhibitions include: The same river twice, Deste Foundation & New Museum, Benaki Museum, Athens, It would go, Klowden Mann, Los Angeles, Les mains sans sommeil, Palais de Tokyo, Paris.

Malvina Panagiotidi lives and works in Athens. She studied architecture at the University of Thessaly and at the postgraduate program “Art in Context” at the Universität der Künste in Berlin. She has been awarded the SNF Artist Fellowship Program (2018) and the Spyropoulos prize (2016). Selected shows: “Gone today, here tomorrow”, AnnexM-Athens Concert Hall; ”All Souls Day-Part II”, Rodeo Gallery (Piraeus); “Constellations in the dirt”, NEON & Ephorate of Antiquities of Cyclades, Kouphonisi Archaeological Collection building; “It was evening all afternoon”, You cannot hide for more than seven years curatorial venture (Athens); “The Equilibrists”, DESTE Foundation & New Museum, Benaki Museum (Athens); “Hypnos Project”, Onassis Cultural Center (Athens); “The predictions of a one-night king”, Chalet Society (Paris); “A monument for the first homosexual emancipation movement”, HKW (Berlin).

Kostas Roussakis was born in 1971, in Moschato, Athens. He studied sculpture at the Athens School of Fine Arts under professor George Lappas. His work deals with creating conditions of experiencing the space, the contexts, the self and the other. It usually takes the form of large ephemeral sculptures, sculptural images or common objects. He has presented his work in three solo shows, two at Elika Gallery (2017, 2013) and one at the open air basketball court of Moschato. He has participated, among others, to the exhibitions: “Collectanea”, The American College of Greece; “a.O. – b. c.”, State of Concept (2020); “Constellations in the Dirt”, Kouphonisi Archeological Collection – ΝΕΟΝ; “Stopping Point”, Daily Lazy (2018); “(Im) material Gestures”, Fondazione Sandretto Re Rebaudengo (2016); “Dirty Linen”, DESTE Foundation – Benaki Museum; “Fireworks out of Season – Riviera”, Riviera open air cinema (2015); “The Magic Circle”, Loraini Alimantiri Gazon Rouge (2012); “Cabinets of Miracles”, Zone-D, (2010); “Heaven – 2nd Athens Biennale”, Water Plaza Faliron Olympic Complex (2009); “Damien Hirst”, Palaio Faliro (2007).

Maria Tsagkari lives and works in Athens. She studied Conservation of Antiquities and Works of Art at the Technological Εducational Institute [TEI], graduating with honors in 2005; her graduation dissertation was on the work of Alexis Akrithakis. She worked as art restorer for the National Gallery of Athens and for private collections. In 2006 she enrolled at Athens School of Fine Arts. In 2007-2008 she attended the Facultad de Βellas Αrtes in Madrid on a state scholarship. She graduated from the ASFA in 2010 and continued at the postgraduate program in Visual Arts, graduating in 2012. Since 2012 she has been working as a lecturer at Athens School of Fine Arts. Her works have been exhibited internationally receiving awards such as the 2014 HYam award for the young Mediterranean artistic scene (Paris). Selected exhibitions: “AQUA”, Contemporary Artists and Water Issues, SESC Belenzinho, São Paulo, Brazil; Château de Penthes, Geneve; “STANDART”, 1st Triennial of Contemporary Art in Armenia; “Coup de Ville”, Triennial of Contemporary Architecture, Belgium; 4th Biennale of Contemporary Art, “Everywhere but now”, Thessaloniki; “A fresh, A new generation of Greek Artists”, National Museum of Contemporary Art, Athens.

Paky Vlassopoulou lives and works in Athens. Her work is informed by the dialectics of traditional sculpture making in relation to spatial issues, object hood, functionality and bodily experiences. From time to time she is concerned with thematics that deal with knowledge production, history, ruins and lately with issues revolving around the service providing industries by questioning the role of care and hospitality. Often her work takes the form of an event, open to participation and discussion. Selected exhibitions, fellowships and residencies include: International Studio & Curatorial Program (ISCP) New York City, USA; Artworks– Stavros Niarchos Foundation (SNF) Artist Fellowship Program; “Phenomenon 3”, The Association Phenomenon and the Kerenidis Pepe Collection, Anafi Island, Greece; WHW Akademija, Zagreb, Croatia; “The Equilibrists”, a project by the New Museum, New York and the DESTE Foundation, Benaki Museum, Athens, Greece; AIR Residency Antwerpen, Antwerp, Belgium, “Reverb: New Art from Greece”, School of the Museum of Fine Arts, Boston, USA; “A Thousand Doors”, commissioned by NEON Foundation and The Whitechapel Gallery, Athens, Greece. In 2012, together with artists Chrysanthi Koumianaki and Kosmas Nikolaou, she co-founded 3 137, an artist run space operating in Athens, Greece.